When discussing the performance of grease interceptors, either hydromechanical (HGI) or gravity (GGI), Stokes’ Law is generally invoked.  The form of the equation that is typically referenced is this:

…and it is at this point that the discussion starts to go off track.

Stokes’ Law is properly applied to particles rising (or falling) under ideal conditions in stationary background fluid.  The Stokes’ viscometer is an example of this type of flow.  Stokes’ Law is appropriate for very low Reynolds numbers so it will rarely be applicable in an interceptor and never in the ASME/IAPMO HGI performance test.  Using Stokes’ Law to calculate the performance of a grease interceptor is akin to using only Newton’s Second Law (F=ma) to launch a rocket.  It will go up, who knows where it will come down.

The flow dynamics of an interceptor are relatively complex.  There are free surfaces, internal features, dead zones and short circuits.  While you can get a decent idea of the flow patterns using CFD it will still be an approximation.  On top of that, the actual particle sizes are unknown.  Even if with a few thousand accurate streamlines and a few thousand accurately sized particles it would not be known which particles belonged on which streamline so all the residence times would be an educated guess.  If the residence time is unknown it cannot be determined if the particles will rise far enough to be trapped or not.

This is where testing comes in.  The existing ASME/IAPMO test for HGIs is not perfect.  While it is arguably representative of some small fraction of real world installations it is not practical to model it.  The flow rate changes constantly, it is mostly turbulent, except perhaps at the very end, and it is impossible to say what the melted lard particles look like.  Also, because the flow rate is an average of the rated flow, some of the flow is well above the rated flow for the unit and some is well below.  All the grease happens to come in at the low flow.  So how does the unit actually perform at its rated flow?

Despite its weaknesses, the existing test is consistent and reproducible so it does provide users with some guidance, particularly in terms of relative performance of different units.  When coupled with CFD the test results can start to give insights into what is really happening inside the unit and provide a basis for modelling approximate performance, which can then allow for more accurate scaling.  However we are not there yet.

When it comes to GGIs there is no test at all and that leaves a major knowledge gap.  Without any data, no one really knows what is happening with these units.  They are bought and sold with the assumption that they are better than nothing.  That is certainly true but it is not the basis of good engineering.

ASME is moving in the right direction, having put together a committee to work on developing a test.  This has raised the issue of residence time in GGIs.  The currently accepted 30 minute residence time is, based on what I can find so far, completely arbitrary.  It has nothing to do with Stokes’ Law or interceptor performance.  All other things being equal, 30 minutes will give better removal than 15 minutes and worse removal than 45 minutes but that is only conclusion that can be drawn.  It is important that the ASME committee keep an open mind with respect to residence time and not settle on 30 minutes unless there is some scientific reason to do so. 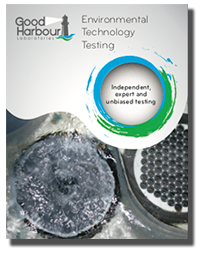